Activates the renewal process of your skin with real bee venom. 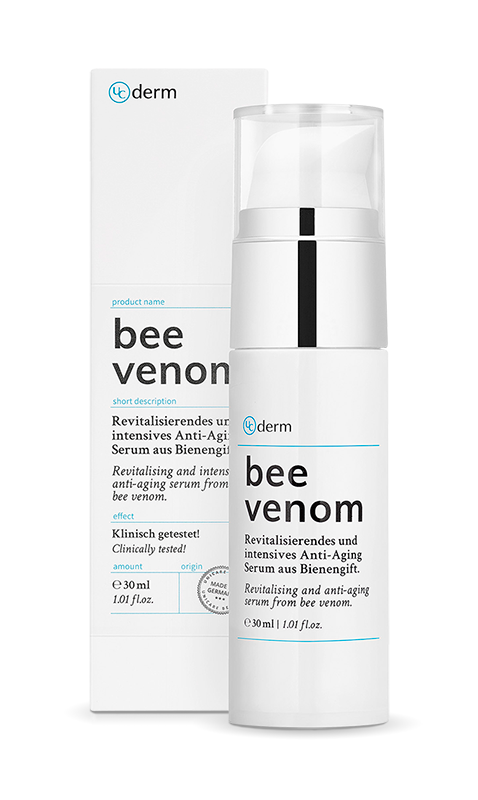 The high effectiveness of UCderm bee venom is based on real bee venom, supplemented with hyaluronic acid. Even a small amount of bee venom on the skin increases the blood circulation, activates the self-healing power of the skin cells and opens their channels. On one hand the collagen and elastin production is stimulated and on the other hand hyaluronic acid can be better absorbed into the skin, where it binds large quantities of moisture. Regular use improves the structure of the skin and significantly reduces the number of wrinkles as well as the depth of wrinkles.

Apply a small amount of UCderm bee venom to the face, neck, decollete or hands once or twice a day after cleansing and apply gently with your fingers.
After a short application time you can use cosmetics and care products as usual.

Please note: Always use UCderm bee venom before your usual day or night care. The bee venom not only improves the absorption of already contained care substances into the skin, but also those that are applied afterwards.

Attention bee venom: Persons who are sensitive or allergic to bee stings or one of the ingredients must not use UCderm bee venom. Before applying UCderm bee venom to the face, check its tolerability on a small, inconspicuous area of skin such as the forearm.

Please also refer to the instructions of use.

The efficacy and the dermatological tolerability of UCderm bee venom were confirmed in our clinical study with women between 19 and 71 years of age. After twelve weeks it could be determined by apparatus that skin‘s moisture increased by 68.71% and the elasticity by 74.82%. In addition, wrinkles were measured to have decreased by 23.63%.

And this is what our participants say:

stated that they could see and feel an effect after the first application.

noticed that their wrinkles were significantly reduced and their skin felt softer.

are convinced that their skin is firmer.

The main component and eponym in UCderm bee venom is genuine bee venom. It has long been known as a remedy and is used in medicine for the treatment of rheumatism, joint diseases and sports injuries.

For this it is collected without harming the bee with a special device on the beehive. This device is placed horizontally in front of the flight holes and consists of three different layers: a wire mesh, a membrane underneath and a glass plate. With the help of a mild electrical impulse at this device, the bees are animated to sting reflexively through the wire mesh into the fine membrane. The poison then drops onto the underlying glass plate, where it dries and is then scraped off. In its crystalline form it is filled and later used as a diluted solution.

Bee venom is a complex mixture of enzymes, peptides and biogenic amines. In total, it is composed of at least 18 different pharmacologically active ingredients, not all of which have yet been extensively researched.

Only in this combination can the toxin unfold its full effect. Also in cosmetics: Applied to the skin, the blood circulation is increased, the self-healing power of the skin cells is stimulated and their channels are opened for further care substances. The resulting stimulated collagen and elastin production promotes the skin’s supporting function and thus counteracts the formation of wrinkles.

Yes, for our formulation in UCderm bee venom we only use real bee venom. Poison, which is really produced by bees.

How is bee venom produced? Do bees have to die for it?

The poison for UCderm bee venom is obtained without harming the bee with a special device on the hive. This device is placed horizontally in front of the flight holes and consists of three different layers: a wire mesh, a membrane underneath and a glass plate. With the help of a mild current impulse at this device, the bees are animated to sting reflexively through the wire mesh into the fine membrane. The poison then drips onto the underlying glass plate, where it dries and is then scraped off. The bees do not have to die because their sting does not get stuck in the membrane.

Is my skin irritated by the application of UCderm bee venom?

No. UCderm bee venom contains a minimal concentration of bee venom which is only applied externally to the skin. In this composition you will feel at most a slight heat development, as your skin is better supplied with blood.

Can I also use UCderm bee venom for the eye area?

Yes, you can use UCderm bee venom for your eye area without any problems. Apply a small amount of the bee venom serum carefully with your ring finger around the eyes and pat it in lightly. Take care not to spread the serum too close to the eye. Always work from the inside out and avoid too much pressure.

Is UCderm bee venom suitable for all skin types?

UCderm bee venom has been clinically and dermatologically tested for its skin compatibility. It is basically suitable for all skin types. However, an allergy or skin reaction such as redness or itching can never be completely ruled out in individual cases. Therefore, before using it on your face, check its tolerability first on a small, inconspicuous area of skin, such as the forearm.

When should I not use UCderm bee venom?

Do not use UCderm bee venom if you are sensitive or allergic to bee stings or any of the ingredients.

I'm allergic to wasp bites. Can I still use UCderm bee venom?

We also recommend caution if you are allergic to wasp bites. Wasp venom partly contains the same amount of allergens as bee venom. This means that a reaction may or may not occur. You should therefore test the bee serum on an inconspicuous area of skin, such as the forearm. If your skin shows no reaction after several minutes, you should be able to use it without hesitation.

Can I apply my usual cosmetic products after use?

Yes, after a short exposure time you can use make-up and other care products as usual.

We always recommend applying UCderm bee venom before the usual day or after care, as the bee venom not only improves the absorption of already contained care substances into the skin, but also the substances that are applied afterwards.

You can use UCderm bee venom for six months after the first opening.