Relaxes your facial features similar to botulinum toxin – without injections. 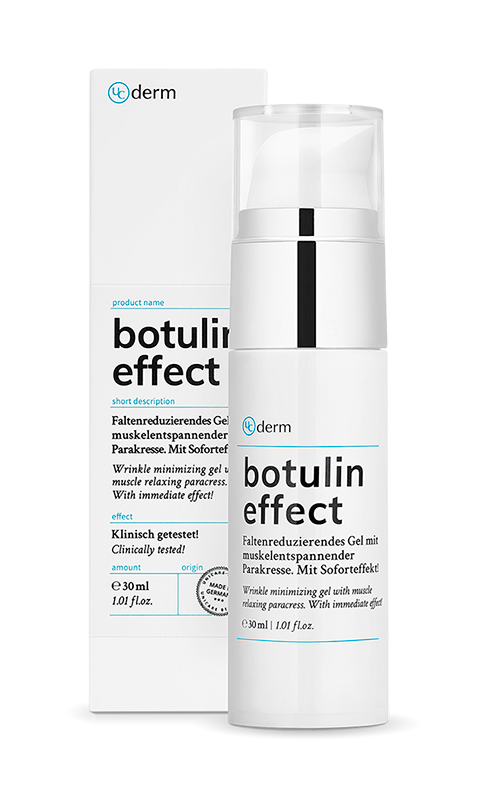 The anti-aging gel UCderm botulin effect works with a noticeable immediate effect. It is effective against fine lines and wrinkles caused by dryness and intensively moisturises your skin. The active ingredient spilanthol extracted from paracress noticeably relaxes your facial features. Fine wrinkles are reduced and their formation is prevented. Supported by the moisture-storing and moisture-preserving properties of hyaluronic acid and silver hair grass root, the skin appears soft, relaxed and refreshed.

The main active ingredient of UCderm botulin effect is the plant extract spilanthol, which is obtained from paracress. Applied to the skin, it unfolds a very slight local anaesthetic for a few hours, similar to the effect of botulinum toxin. Facial musculature relaxes, mimic facial wrinkles are reduced and counteracted.

This active ingredient is supplemented by hyaluronic acid and the extract of the silver hair grass root. These increase and maintain the moisture content in the skin and thus improve its smoothness and elasticity. All in all, the skin is gently smoothed and significantly firmer – without needles or rigid facial features.

Apply a small amount of UCderm botulin effect to the face, neck or decollete in the morning and evening after cleansing and work in gently with your fingers.
After a short exposure time you can use your cosmetics and skin care products as usual. If you want to optimise the result, apply UCderm botulin effect several times throughout the day.

Please note the instructions for use.

Our clinical study with women between 26 and 67 years of age confirmed the efficacy and skin tolerance of UCderm botulin effect.
After eight weeks of use, it was determined by apparatus that the skin moisture increased by 51.47% and the elasticity of the skin by 38.04%. Wrinkles were reduced by 34.72% according to our measurements.

This is what our testers say:

confirm an increase in skin moisture.

said that their skin is firmer.

noticed a visible and noticeably firmer skin already after the first application.

Paracress, also known as jambú, originates from northern Brazil, where it is used not only as an ingredient in salads, soups and vegetable dishes, but also in traditional medicine. Its flowers and leaves have an analgesic, anti-inflammatory and antibiotic effect. Freshly chewed or as a compress, they alleviate toothache, oral inflammation, rheumatism or gout. But they are also used for insect bites and fungal infections.

Here in Europe, we are more interested in their anti-aging agent spilanthol, which is found in the flowers of paracress. Applied to the skin it acts like a gentle local anaesthetic and is therefore treated as a natural alternative to botulinum toxin.

Just like the toxic poison, it reduces unconscious, minimal muscle contractions in the face and thus prevents and even minimizes facial expression lines. The effect is not quite as strong, since it is not injected under the skin. But there are no side effects such as redness, bruises, swelling, pain or restricted facial expressions.

Yes, even after the first application of UCderm botulin effect to the skin, you will feel the local, slightly anaesthetic effect of Spilanthol. The facial musculature can relax, which softly smoothes facial expression lines in particular. The hyaluronic acid contained in the product additionally cushions the skin with its moisture-binding properties.

However, the long-term reduction of existing wrinkles and the prevention of new wrinkles is only achieved with regular use.

How long does the relaxing effect last?

After the application of UCderm botulin effect your skin can relax for several hours.

Do my facial features then appear frozen?

No. The anaesthetic effect of Spilanthol is so gentle that the muscles under the skin remain flexible and your normal facial expressions are not affected.

Will my skin get used to the relaxing effect at some point, so I have to increase the amount I apply?

No. Although after repeated use the slightly anaesthetic effect of Spilanthol is no longer perceived as strongly, long-term use does not lead to habituation. The relaxing effect does not become weaker.

Is UCderm botulin effect only applied to single wrinkles?

No. Of course, you can only apply UCderm botulin effect to individual skin areas such as the forehead or eye area. However, we recommend always spreading it over a large area and not selectively.

Is UCderm botulin effect suitable for all skin types?

UCderm botulin effect has been dermatologically tested for its skin compatibility. It is basically suitable for all skin types. However, an allergy or skin reaction such as redness or itching can never be completely ruled out in individual cases. If you have very sensitive skin or are unsure, test the gel on an inconspicuous spot such as the forearm.

When should I not use UCderm botulin effect?

Do not use the product if you are sensitive or allergic to any of the ingredients. UCderm botulin effect must not be applied to the décolleté during breastfeeding in order to avoid possible contact of the child with the product.

Can I also use UCderm botulin effect for the eye area?

Yes, you can use UCderm botulin effect for your eye area without any problems. Apply a small amount of the gel carefully with your ring finger around the eyes and pat it in lightly. Take care not to spread the gel too close to the eye. Always work from the inside out and avoid too much pressure.

Is UCderm botulin effect a real alternative to botulinum toxin?

Yes, because the visible result is the same with UCderm botulinum effect, even if it occurs more naturally and gently. Unlike botulinum toxin, UCderm botulin effect has no long-lasting toxic effect on the nerves and does not completely prevent muscle contraction. It acts only temporarily like a local anaesthetic. This makes it less dangerous and less painful. It cannot be overdosed and there are no side effects. In addition, the facial features remain authentic.

Can I apply my usual cosmetic products after use?

Yes, after a short application time you can use make-up and other care products as usual.

You can use UCderm botulin effect for six months after the first opening.