Gently nourishes and regenerates your skin with pure snail secretion. 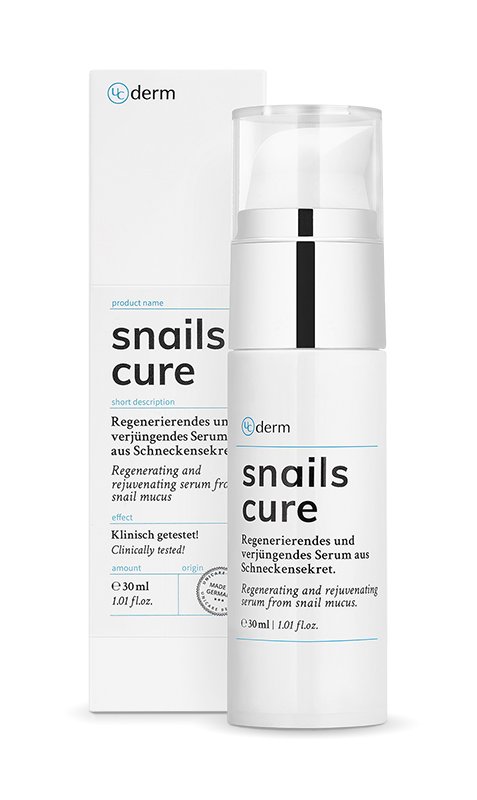 The regenerating and rejuvenating active ingredient concentrate UCderm snails cure from pure snail secretion nourishes your skin soft and supple. Active components of snail secretion such as proteases, allantoin, collagen, elastin, glycolic acid, enzymes and vitamins A and E are supplied to your skin. In this combination they strengthen the skin‘s own defences and reduce skin irritations, wrinkles, pigment spots, stretch marks and acne. The result: Firm skin and a soft, refined complexion.

The snail secretion in UCderm snails cure consists of a multitude of active components such as proteases, allantoin, collagen, elastin, glycolic acid, enzymes and vitamins A and E, all of which have long been documented benefits for the skin. In this combination they protect the skin against environmental stress, provide it with sufficient moisture and strengthen the skin’s own defences. Damaged, scarred or irritated skin is regenerated. Wrinkles, pigmentation marks and stretch marks are reduced and acne, keloid formation and cellulite are actively combated. This makes the skin softer and much more supple. The skin quality improves.

Apply a small amount of UCderm snails cure to the skin once or twice a day after cleansing and pat lightly with your fingers.
After a short exposure time you can use your cosmetics and care products as usual.

Please note the instructions for use.

Within our clinical study with women aged between 23 and 69 years, the efficacy and skin tolerance of UCderm snails cure was successfully tested. We were able to determine with apparative methods that the skin moisture increased by 62.99% and the elasticity by 58.90%. In contrast, skin redness was reduced by 14.46% and wrinkles by as much as 24.73%.

These are the impressions of our test persons:

find their skin colour more even.

stated that their skin is noticeably softer.

confirmed the soothing and moisturizing effect.

The secretion of mucus is essential for snails. The mucus helps them to move around, protects them from injuries and infections and promotes the regeneration of damaged tissue. It has a moisturising, calming, antibacterial and regenerative effect.

It has many skin care properties that have been recently rediscovered on a snail farm in Chile. There it was found that the workers had noticeably soft, young hands due to contact with the snail mucus and that injuries healed surprisingly quickly without scars or infections. As a result, snail secretions were intensively researched and made available to cosmetics as a natural raw material.

Here in Europe, modern extraction techniques are used to extract snail mucus, in which the animals are neither mistreated nor killed.

From which snail is the secretion obtained?

For UCderm snails cure we use the secretion of the snail Helix Aspersa Muller.

How is snail secretion obtained? Does the snail have to suffer or even die?

The production of snail secretion for UCderm snails cure takes place on a biologically managed snail farm in northern Italy. There, the snails are collected for extraction, washed and gently stimulated to secrete mucus in a patented process. The mucus is then removed and filtered. NO electric shocks or similar cruel methods are used.
The snails are neither mistreated nor killed during the entire extraction process. They are also not sold for gastronomic purposes.

Is the use of UCderm snails cure limited to the face?

No. The use of UCderm snails cure is not limited to the face. You can also use it on other parts of the body without hesitation.

Can I also use UCderm snails cure for the eye area?

Yes, you can use UCderm snails cure for your eye area without any problems. Apply a small amount of snail serum carefully with your ring finger around the eyes and pat it in lightly. Take care not to spread the serum too close to the eye. Always work from the inside out and avoid too much pressure.

Can UCderm snails cure also be used after depilation?

Yes, whether shaving, epilating, sugaring or waxing: Especially after a depilation the skin is very irritated and the skin demands a calming care. UCderm snails cure soothes skin irritations, cools and moisturises. Your skin becomes soft and supple again.

Is UCderm snails cure suitable for all skin types?

Yes, UCderm snails cure is also suitable for allergy sufferers and people with sensitive skin. However, skin reactions such as redness or itching cannot be ruled out in individual cases. Therefore, first check your tolerance on a small, inconspicuous skin surface, for example on the forearm.

Do not use UCderm snails cure if you are allergic to any of the ingredients.

Can I apply my cosmetic products after use?

Yes, after a short application time you can use make-up and other care products as usual.

Can there be any adverse effects when using UCderm snails cure?

The skin compatibility of UCderm snails cure has been dermatologically tested and confirmed. Snail secretion normally does not irritate the skin. Nevertheless, intolerance reactions such as redness or itching can never be completely ruled out in individual cases. In these cases, stop using UCderm snails cure immediately. Consult a doctor or pharmacist if adverse effects persist for more than a week.

You can use UCderm snails cure for six months after the first opening.